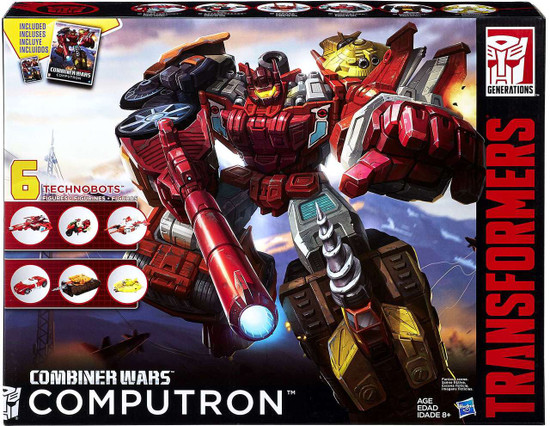 In the Combiner Wars, teams of Autobots and Decepticons combine to form giant super robots and battle with the fate of worlds in the balance. Computron is never wrong. Of all the Combiner robots, he is the most successful at merging the different personalities of his component bots. The Autobot processes input from each of Technobots and evaluates all possible outcomes to identify the perfect plan of attack.
Join the battle and build a Combiner super robot with this 7-in-1 Combiner Wars Computron Collection Pack. Get 6 Technobots figures that combine to form a Computron Combiner figure in this 1 set. The Voyager Class Scattershot figure forms the torso of the Computron Combiner figure; the Deluxe Class Afterbreaker, Strafe, Lightsteed, and Nosecone figures form the arms and legs; and the Legends Class Scrounge figure becomes a Combiner weapon.
The Combiner Wars universal connection system means these figures work with other Combiner Wars figures. Combine the Scattershot figure with other Deluxe Class Combiner Wars figures or combine Afterbreaker, Strafe, Lightsteed, and Nosecone figures with other Combiner Wars Voyager Class figures to build more Combiner super robot figures. (Additional figures are each sold separately.) The pack also includes 12 accessories, a Cybaxx mini space shuttle figure, a Combiner Wars poster, and a collectible Computron character card.
computron
630509407781
138274
Out of Stock
New