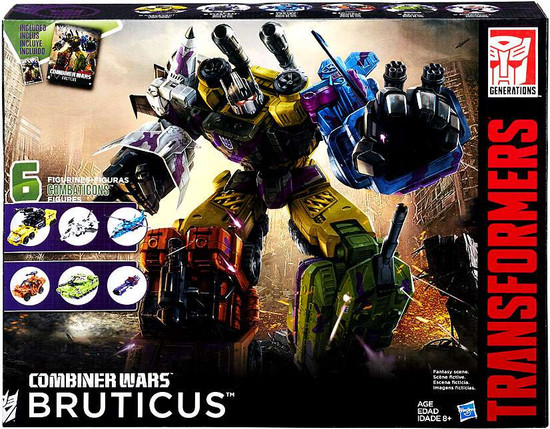 In the Combiner Wars, teams of Autobots and Decepticons combine to form giant super robots and battle with the fate of worlds in the balance. The Decepticon Combiner Bruticus has immense physical power. He may not be the smartest bot, but his overwhelming strength and indestructible armor are more than enough to make him a nightmare in battle.
Join the battle and build a Combiner super robot with this Combiner Wars Bruticus Collection Pack! Get 6 Combaticons figures that combine to form a Bruticus Combiner figure in this 1 set. The Voyager Class Onslaught figure forms the torso of the Bruticus Combiner figure; the Deluxe Class Decepticon Blast Off, Decepticon Vortex, Swindle, and Brawl figures form the arms and legs; and the Legends Class Shockwave figure becomes a Combiner weapon.
The Combiner Wars universal connection system means these figures work with other Combiner Wars figures! Combine the Onslaught figure with other Deluxe Class Combiner Wars figures or combine the Decepticon Blast Off, Decepticon Vortex, Swindle, and Brawl figures with other Combiner Wars Voyager Class figures to build more Combiner super robot figures! (Additional figures are each sold separately.) The pack also includes 10 accessories, a Combiner Wars poster, and a collectible Bruticus character card.
bruticusg2
630509416493
134251
Out of Stock
New