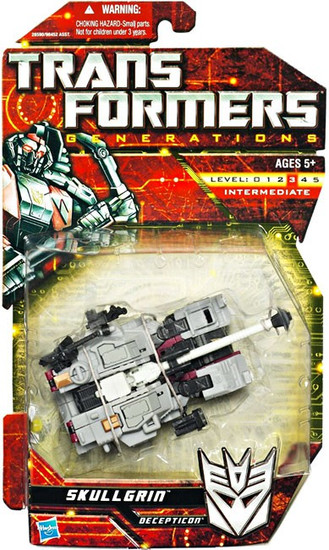 The ruthless, methodical intelligence for which SKULLGRIN is known is only a front. Inside of him rages the spark of a mad beast, straining to break free. He rarely engages in combat, so afraid is he that the heat of battle will drive him into a frenzy from which he will never emerge. Though he is a DECEPTICON, he still fears the destruction of which he is capable.

Turn the tables on enemy forces when you throw this warrior into the fight! Your SKULLGRIN figure is dedicated to destroying any opponent and his battle-axe will help you two get the job done. If the hand-to-hand robot action turns into a chase, convert your fighter into half-track vehicle mode, convert his battle-axe into a cannon and send him rolling off to rule the streets!

WARNING: CHOKING HAZARD Small parts. Not for children under 3 years.