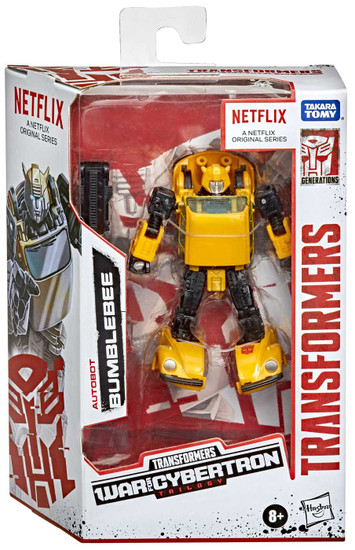 Build the ultimate battlefield inspired by scenes from the Transformers War for Cybertron series. This pack includes a Deluxe Class 5.5-inch scale Bumblebee figure inspired by the character as seen in the War for Cybertron series. With over 40 deco ops and battle-worn details this is the most series-accurate version of the character. As the war wages through space, Bumblebee works to make a name for himself with the Autobots.

This Bumblebee toy converts to his licensed Volkswagon Beetle mode in 20 steps and includes 5 series-inspired accessories. Comes with a piece of a Teletraan-1 backdrop. Fans can collect other pieces from series-inspired Deluxe class figures to build the Teletraan-1 backdrop and pose out their figures in front of it! (Each sold separately, subject to availability.) Fun for adults and kids ages 8 and up!
trawarcybertrilbumb
5010993782178
349293
Out of Stock
New