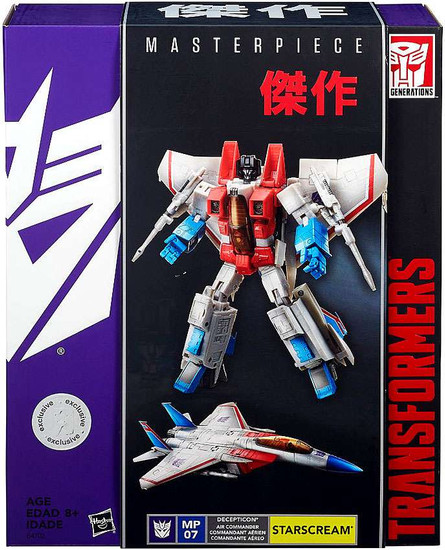 Unsurpassed in ego or ambition, Starscream is the scheming second-in-command to Megatron. His all-consuming hunger for absolute power overcomes what little reason there is in him, driving him to adopt ever more vile plots in his quest to unseat Megatron as leader of the Decepticons. With his trademark null-ray cannons and a vast array of secondary weapons, Starscream is second only to Megatron and Optimus Prime in power.

Autobots beware, because the ultimate Decepticon air commander is on the hunt for someone to fight! He converts from robot mode to high-speed jet mode, and in either mode he's ready for major combat with his mortal enemies. His shoulder missile launchers leap out when he gets an Autobot in his sights, and with a missile for each one, he's always armed! The mini-pilot figure goes in his cockpit in jet mode, and it even comes with a display stand for your collection. This Masterpiece Starscream figure will change your Transformers adventures forever!
tranmstrtrustarscream
630509370108
110382
Out of Stock
New