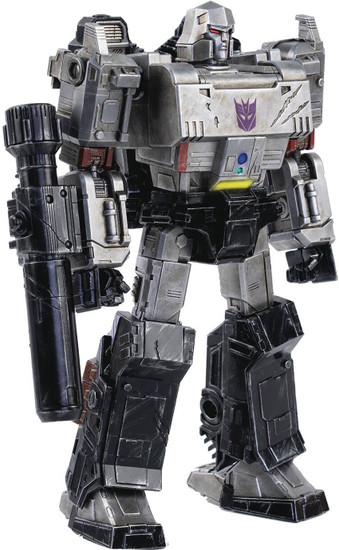 From Threezero. Hasbro and Threezero are pleased to introduce the feared Decepticon leader Megatron as the next Transformers: War For Cybertron Trilogy product in the Transformers DLX Collectible Figure Series! At 10 inches tall, the DLX Megatron collectible figure features approximately 50 points of articulation, a die-cast metal frame, and LED illuminated eyes and body*! Accessories include D50-R35 Fusion Cannon, HPR Telescopic Laserstrike Launcher, a total of five pairs of interchangeable hands, and a DLX Action Stand for various expressive poses. The two weapon accessories are able to combine, forming the impressive NFM Particle Beam Mega-Launcher. Like other DLX series figures, Megatron also features a die-cast metal frame for increased playability, with a finely-detailed paint application that showcases the war-torn weathered look as seen in the Transformers: War For Cybertron Trilogy!