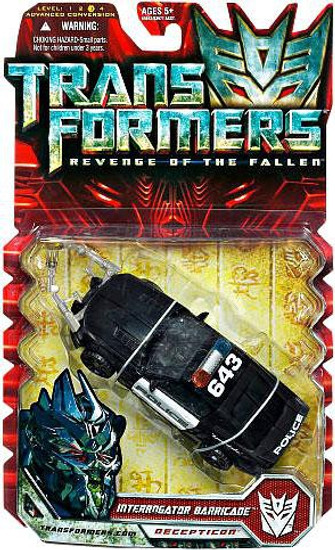 Repaired and retrofitted after the battle of Mission City, BARRICADE elected to remain on Earth while STARSCREAM returned to CYBERTRON. He has devoted his time on Earth to gathering intelligence for the inevitable rise of the DECEPTICONS. He stalks and captures important humans, then scans, interrogates and disposes of his captives using the highly sensitive probes built into his vehicle mode.
Recreate exciting movie scenes or stage your own living room battles with this DECEPTICON defender! This fierce-looking figure features a spring-loaded punch attack in robot mode and snap-on probe arms in Saleen S281 Mustang Police car mode! Race into battle with and take on AUTOBOT forces with this super-cool sidekick!
transinterbarrdel
653569415961
252401
In Stock
New