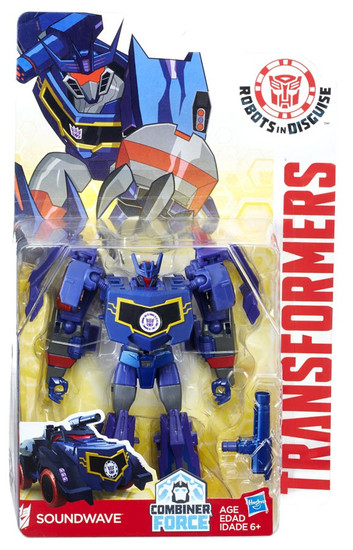 Collectible Transformers: Robots in Disguise Combiner Force Warriors Class figures are larger-scale figures that feature classic Transformers conversion and awesome weapon accessories. Change this Warriors Class Soundwave figure between robot and tank in 14 steps. Figure comes with 1 blaster accessory. Scan the Decepticon shield on this Soundwave figure to unlock a token in the mobile app (see below for app details).
Soundwave is the ultimate spy and communications specialist, capable of scanning and decoding any radio signal within range. Using radio waves to monitor the Autobots and their plans, Soundwave locates the enemy and informs the Decepticons of their whereabouts. Dedicated and devoted to the cause, Soundwave has quickly moved up the Decepticon ranks.
Join the battle with this figure based on the Transformers: Robots in Disguise animated series.
Choose a side, and prepare for battle!
ridwarriorwoundwave
630509511310
151463
In Stock
New