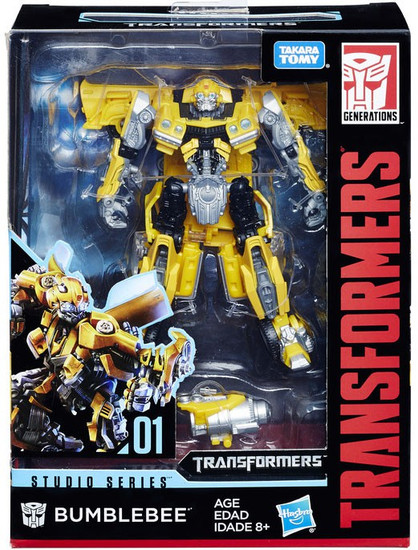 Studio Series 01 Deluxe Class Movie 1 Bumblebee figure
Premium figure and packaging inspired by the iconic Police Chase scene
Figure scale reflects the character's size in the world of Transformers Movie 1
Converts between robot and Chevrolet Camaro modes in 22 steps
Removable backdrop displays Bumblebee figure in the Police Chase scene.
Reach past the big screen and build the ultimate Transformers collection with Studio Series figures, inspired by iconic movie scenes and designed with deco and figure scales that reflect the movie universe.
In the Police Chase from Transformers Movie 1, Bumblebee faces off with Barricade as they fight to recover the map to the legendary Allspark. The loyal Autobot scout unleashes his skills in battle to stave off the evil Decepticon, while revealing himself as a visitor from above to his new human friends.
This Studio Series 01 Deluxe Class Movie 1 Bumblebee figure converts between robot and Chevrolet Camaro modes in 22 steps and comes with a weapon accessory. Remove backdrop from pack to showcase the loyal Autobot scout in the Mission City Battle scene.
studiostryker
630509629008
255244
Out of Stock
New