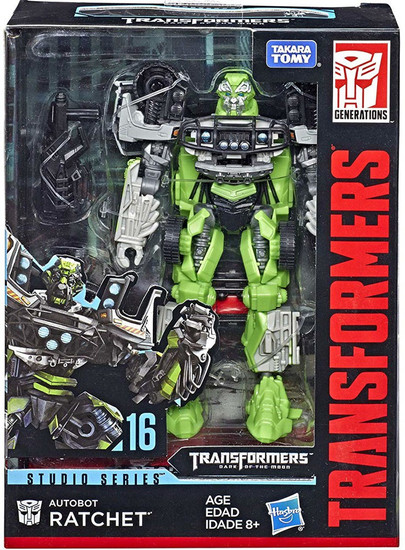 Reach past the big screen and build the ultimate Transformers collection with Studio Series figures, inspired by iconic movie scenes and designed with Deco and figure scales that reflect the movie universe.
In the explosive battle of Chicago from Transformers: Dark of the moon, the autobahn take on the traitorous Sentinel Prime as he works to bring forth Cybertron and enslave earths inhabitants. Autobot ratchet helps destroy the control pillar bringing Cybertron into Earth's atmosphere, saving Earth from Sentinel Prime and the Deceptions.
This Studio Series 16 Deluxe class Transformers: Dark of the moon Autobot ratchet figure converts between robot and H2 Hummer modes in 18 steps and comes with 1 detailed weapon accessory. Remove the backdrop from pack to showcase the trusted Autobot Medic in the battle of Chicago scene.
studioratchet2
630509707584
270027
In Stock
New