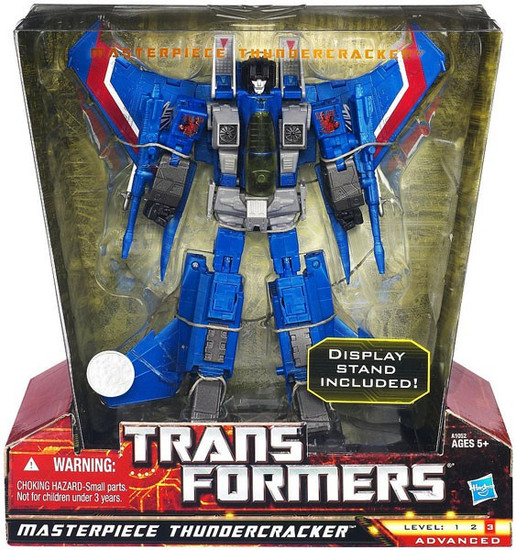 Thundercracker looks down on those who cannot fly with sneering disdain, often going out of his way to attack creatures that cannot fly, just to prove his superiority. It was this attitude that led to him being recruited into the original Seekers squadron alongside Starscream and Skywarp. Though his loyalty to the Decepticon cause is less than total, the fact that he is allowed to indulge his impulse to assault those he considers inferior keeps him flying for Megatron.
The power of this unbelievable Masterpiece Thundercracker figure cannot be denied! This highly articulated and posable Decepticon figure stands tall on his display stand, his weapons at the ready. His canopy opens and his nose-cone swings open when you convert him to fighter jet mode, and his hidden missile pods give him fighter power and firepower! He comes with 2 different heads so you can change his look depending on what kind of trouble he's about to cause for the Autobots. Take your Transformers adventures to the next level with this incredible Masterpiece Thundercracker figure!
masterpiecethundercracker
653569776611
246642
Out of Stock
New