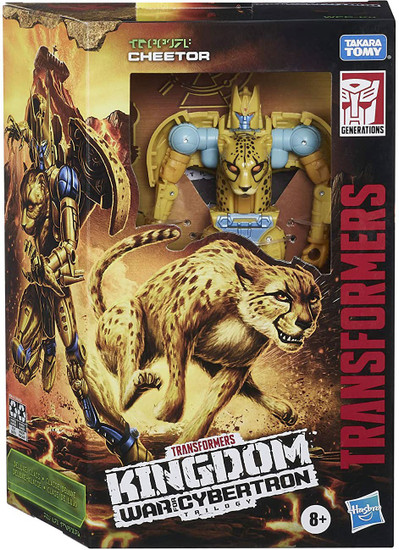 DISCOVER KINGDOM: Worlds collide when the Maximals and Predacons join the fight, coming together with the Autobots and Decepticons in an epic battle that will alter their destiny forever
BEASTIFY THE BATTLEFIELD: Unleash the primal power of the beasts with this Cheetor collectible figure, featuring a detailed beast mode with intricate cheetah-inspired molded fur texture
UNLEASH THE BEAST MODE: Cheetor toy converts into a Beast Wars-inspired cheetah mode in 20 steps. Lower jaw articulation in cheetah mode for a classic look of Cheetor enthusiasm
TAIL BECOMES TAIL WHIP: Tail detaches from cheetah mode during conversion and becomes tail whip that can be held by the figure in robot mode
GOLDEN DISK CARDS REVEAL POSSIBLE DESTINIES: Includes a Golden Disk card that reveals a possible destiny of a key character. Collect other Kingdom figures to reveal all 3 alternate destiny variants for each character! (Each sold separately. Subject to availability)
Includes Transformers Generations War for Cybertron: Kingdom Deluxe Class Cheetor figure, Golden Disk card, and instructions.
Figure scale: 5.5 inches
Ages 8 and up
Warning: Choking Hazard - Small parts. Not for children under 3 years.
trawfckdxcheetor
5010993764754
341823
In Stock
New