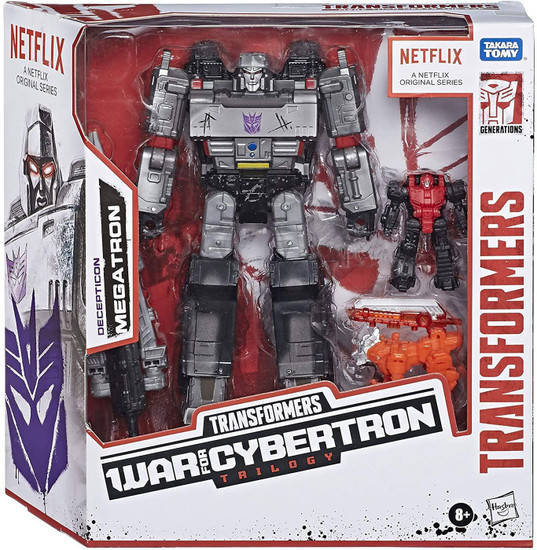 Build the ultimate battlefield inspired by scenes from the Transformers War for Cybertron Netflix series. This pack includes a Voyager Class 7-inch scale Megatron figure inspired by the character as seen in the War for Cybertron series. With 53 deco ops and battle-worn details this is the most series-accurate version of the character. Megatron, the ruthless General of the Decepticon army, leads his troops in a war against the Autobot counter-resistance. The Megatron toy converts to his tank mode in 17 steps and includes 2 series-inspired accessories. Comes with Captive Lionizer and Pinpointer Battle Masters figures that convert to weapon modes in 5 steps. Fans can imagine Megatron taking the Autobot Battle Masters as prisoners and using their weapon modes to gear up for battle! Fun for adults and kids ages 8 and up! Transformers and all related characters are trademarks of Hasbro. Includes: 3 figures, 2 accessories, and instructions
trimegatronpinpointlionizer
5010993695614
340754
Out of Stock
New