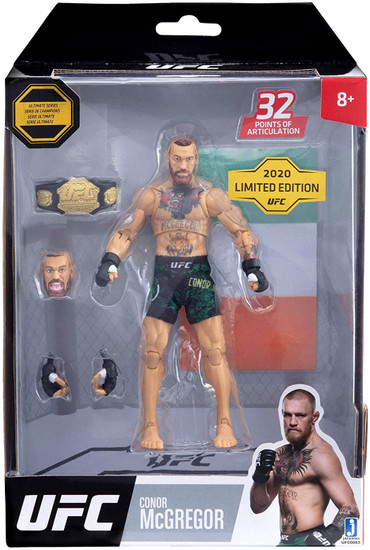 Get ready for UFC Fight Night with UFC Champion The Notorious Conor McGregor! This awesome 6 UFC figure features amazing fighter details including true-to-life tattoos, accurate lightweight body-type, and realistic facial expressions! With 2 sets of removable hands, each with UFC gloves, you can knock out your competition to prove youre the top fighter! When victory is finally claimed, switch heads to make sure your challenger and fans know the life-like UFC toy belt is yours! Grab your Irish flag accessory as you become an undisputed UFC Champion! Collect all 7 UFC Ultimate Series Limited Edition Styles, including Daniel Cormier, Donald Cerrone, Jon Jones, Max Holloway, Khabib Nurmagomedov, and limited edition Donald Cerrone figure featured in a cowboy hat and USA chalk fight shorts!
jazufcmcgreggor
191726015918
340759
In Stock
New