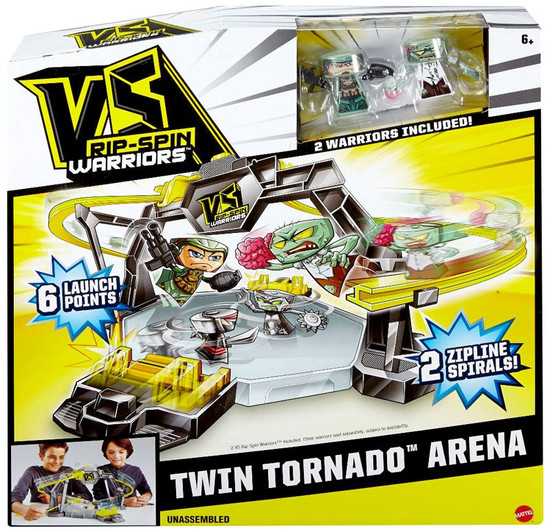 Take the ultimate faceoff to the next level inside the VS Rip-Spin Warriors Twin Tornado Arena! With the dual spiral overhead launcher and two configurable dual battle launchers, you can create the most epic battles for total spin-sanity! Just place the VS Rip-Spin Warriors in the two ramp launchers, pull the rip cords to activate the flywheels, press the safe start button to launch them down each spiral zipline and into the arena at the same time. You can also place two VS Warriors in each dual launcher, thread one zip cord in each launcher, and press the button to shoot two launchers into battle sending four warriors into battle. Twin Tornado Arena allows you to battle up to six VS Warriors at once! See whos knocked out first and battle in all-new ways with stunting action. Theres no limit to the spin-sanity! The Twin Tornado Arena includes dual spiral overhead launcher, two configurable dual battler launchers, two exclusive VS Warriors and large connectable battle arena. Collect all the arenas to build the ultimate VS Rip-Spin Warriors world. Each arena sold separately.
vsriptwintornado
887961341683
139426
Out of Stock
New