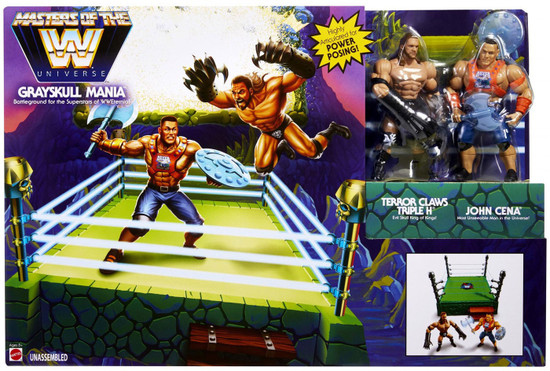 WWE and Masters of the Universe combine into a powerful force: Masters of the WWE Universe! Channel the power with this Masters of the WWE Universe Grayskull Mania ring and figures playset! Step through the "energy-ropes" and into the ring of Grayskull where the fate of WWEternia is decided. It's a no holds barred battle between Terror Claws Triple H and John Cena action figures. Once the dust has settled, the true champion will have powers! The Grayskull Mania ring is 14-inches across and features a sculpted rock exterior, eerie skulls atop the ring posts and blue "laser" ropes. Ring also comes with ring steps so action figures can step up and enter the ring for dramatic, powerful battle! Terror Claws Triple H and John Cena action figures feature retro styling and 16 points of articulation for power posing and can twist into powerful battle positions. The Evil Skull King of Kings, Terror Claws Triple H has petrifying claws to deliver a powerful Pedigree; and as The Most Unseeable Man in the Universe, John Cena comes with an axe and shield to "adjust attitudes." Who will emerge all-powerful? Includes Grayskull Mania 14-inch ring, 2 figures approximately 5.5-inches (13.97 cm) and accessories. Colors and decorations may vary. For ages 8 and up.
masterswwegrayskullmaniabund
887961859614
315215
In Stock
New