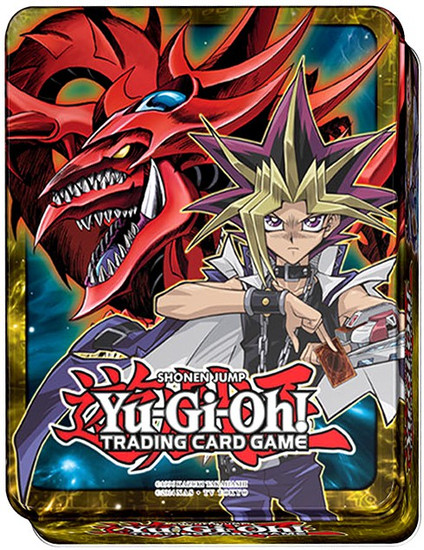 The Yugi & Slifer Mega-Tin comes with:

The Yugi & Slifer Tin and the Kaiba & Obelisk Tin each come with 6 variant cards the highest number of variant cards weve ever included in a tin before! In addition to the Secret Rare Egyptian God Card depicted on the lid, each tin includes 2 Ultra Rare variant cards of Yugi/Kaiba themed cards, including Dark Magician and Blue-Eyes White Dragon, in their Ultra Rare foil technology (a combo not available since their first appearance in the 2002 Yugi & Kaiba Starter Decks).

Each tin also includes 3 Super Rare variant cards, including 2 brand new cards one Pendulum Monster, and one D/D/D boss monster to go with the Pendulum Domination Structure Deck, tentatively scheduled for next year.

As always, each Tin also comes with booster packs for players to open up and get even more cards. The 2016 Mega-Tins Mega-Packs contain popular cards from 2015-2016 booster sets Crossed Souls, Clash of Rebellions, Dimension of Chaos, and Breakers of Shadow!
yugioh2016megatinyugi
083717828600
128911
Out of Stock
New