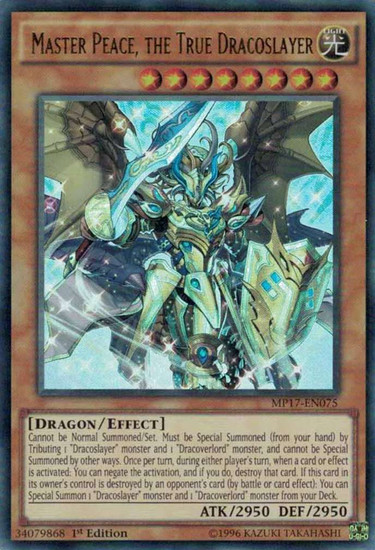 Light. Dragon/Effect. 8. Cannot be Normal Summoned/Set. Must be Special Summoned (from your hand) by Tributing 1 "Dracoslayer" monster and 1 "Dracoverlord" monster, and cannot be Special Summoned by other ways. Once per turn, during either player's turn, when a card or effect is activated: You can negate the activation, and if you do, destroy that card. If this card in its owner's control is destroyed by an opponent's card (by battle or card effect): You can Special Summon 1 "Dracoslayer" monster and 1 "Dracoverlord" monster from your Deck.
mp17en075
604966626337
170313
In Stock
New