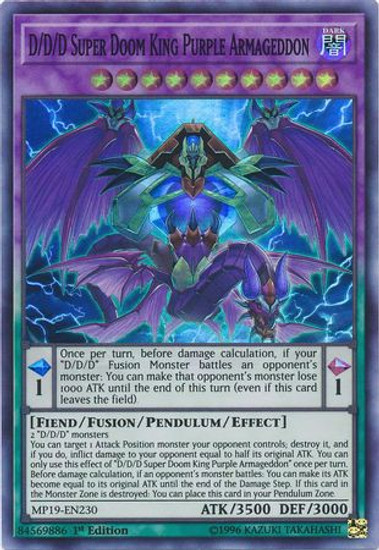 Dark. Fiend/Fusion/Pendulum/Effect. 10. Pendulum Effect. Once per turn, before damage calculation, if your "D/D/D" Fusion Monster battles an opponent's monster: You can make that opponent's monster lose 1000 ATK until the end of this turn (even if this card leaves the field).. . Monster Effect. 2 "D/D/D" monstersYou can target 1 Attack Position monster your opponent controls; destroy it, and if you do, inflict damage to your opponent equal to half its original ATK. You can only use this effect of "D/D/D Super Doom King Purple Armageddon" once per turn. Before damage calculation, if an opponent's monster battles: You can make its ATK become equal to its original ATK until the end of the Damage Step. If this card in the Monster Zone is destroyed: You can place this card in your Pendulum Zone.
mp19en230
0666714326579
306381
In Stock
New