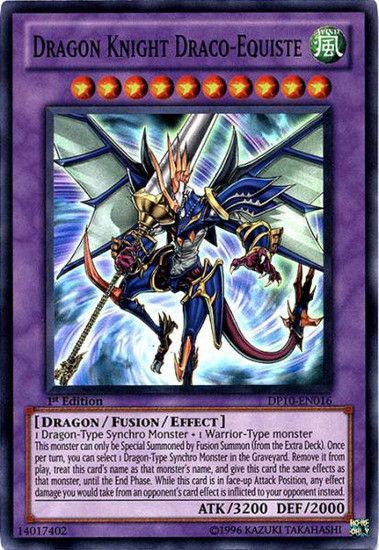 Wind. Dragon/Fusion/Effect. 10. 3200/2000. 1 Dragon-Type Synchro Monster + 1 Warrior-Type Monster.This monster can only be Special Summoned by Fusion Summon (from the Extra Deck). Once per turn, you can select 1 Dragon-Type Synchro Monster in the Graveyard. Remove it from play, treat this card's name as that monster's name, and give this card the same effects as that monster, until the End Phase. While this card is in face-up Attack Position, any effect damage you would take from an opponent's card effect is inflicted to your opponent instead.
dp10en016
0666714264697
219638
Out of Stock
New