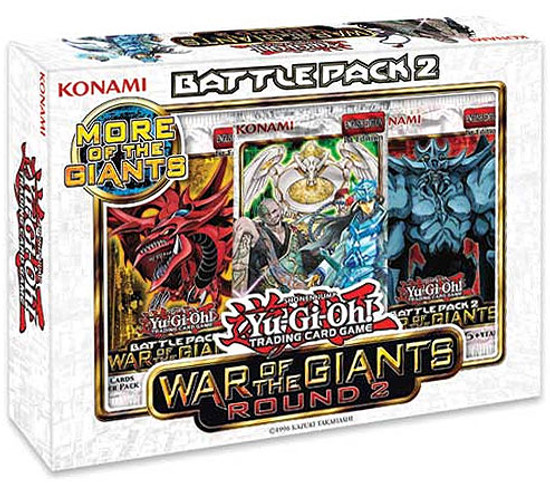 Battle Pack 2: War of the Giants is halfway through its annual cycle. War of the Giants: Round 2 is a new refresher kit designed to expand Battle Packs into booster draft territory, and introduce new cards to the Battle Pack 2 format.
Each box includes 6 packs of Battle Pack 2, plus a new, 16-card pack containing 15 cards for draft play and 1 (non-draftable) collector's card. This gives each kit a combined 45-card pool to be played with right out of the box (sealed pack style), or used in a booster draft format (drafting 3 rounds of 15 cards each).
The (non-draftable) collector's cards are high-demand cards that Duelists have been begging us to re-release. This collector's card is not involved in the draft process and is each Duelist's to keep and add to their collection.
War of the Giants: Round 2 is a 100+ card set containing Ultra Rare, Super Rare, and Common Cards.