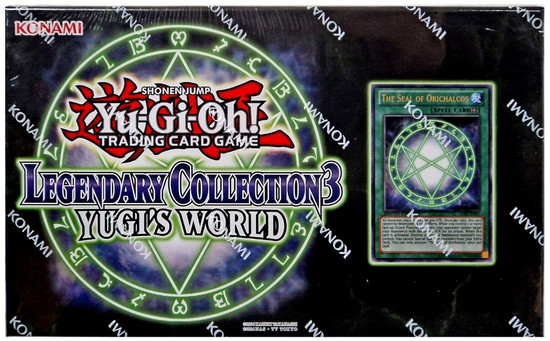 Each Legendary Collection 3: Yugis World contains 52 cards:
1 Ultra Rare The Seal of Orichalcos
1 Ultra Rare Five-Headed Dragon
1 Ultra Rare Dark Necrofear
1 Ultra Rare Guardian Eatos
3 Ultra Rare Tokens 2 with Kuriboh and 1 with the Emissary of Darkness
1 collapsible, hard-backed, double-sided Game Board
5 Legendary Collection 3 Mega-Packs, each with 1 Secret Rare, 1 Ultra Rare, 1 Super Rare, 1 Rare, and 5 commons PER PACK.
GRAND TOTAL PER BOX: 5 Secret Rares, 9 Ultra Rares (including The Seal of Orichalcos), 3 Ultra Rare tokens, 5 Super Rares, 5 Rares, 25 Commons, plus the collapsible double-sided Game Board!
The Seal of Orichalcos! The most long-awaited card in the history of Dueling is FINALLY here!
The Seal of Orichalcos is a Field Spell card with three key powers:
1. Gives all your monsters +500 Attack Points.
2. Highly resistant to removal from the field.
3. Allows your stronger monsters to protect your weaker ones.
Each box of Legendary Collection 3: Yugis World comes with a Seal of Orichalcos of your very own, with all three of these powers and its 100% tournament legal!
Classic Series Mega-Packs
One of the most popular items in last years Legendary Collection was the new concept of Mega-Packs, bursting with 3 foil cards per pack from a gigantic mega-set. This time, were giving classic Yu-Gi-Oh! the Mega-Pack treatment! Each copy of Legendary Collection 3: Yugis World comes with five 9-card Mega-Packs, each with 1 Secret Rare, 1 Ultra Rare, 1 Super Rare, 1 Rare, and 5 Common cards per pack, from the biggest Yu-Gi-Oh! TCG booster set ever created.
Highlights of this 306-card mega-mega-set include:
Over one hundred of Yugis most famous Monsters, Spells, and Traps. Famous cards from some of Yugis most notorious enemies, including Pegasus, Bakura, Rafael, and Marik. Secret Rare versions of legendary cards that have stood the test of time, like Mirror Force, Solemn Judgment, Seven Tools of the Bandit, Mystical Space Typhoon, Book of Moon, Dark Hole, and Black Horn of Heaven. Secret Rare versions of many recruiter monsters like Mystic Tomato, Giant Rat, UFO Turtle, Shining Angel, Mother Grizzly, Flying Kamikari #1, and Pyramid Turtle. Ultra Rare versions of almost every Gravekeepers card. Foil up your Deck, with foil versions of Heavy Storm, Monster Reborn, Bottomless Trap Hole, Upstart Goblin, Chaos Sorcerer, Dragged Down into the Grave, Reckless Greed, and Raigeki Break. Easy-to-get, common versions of popular tournament-level classic-era and classic-themed cards, including Chain Disappearance, Gold Sarcophagus, Solemn Warning, and Soul Taker. Many cards from a decade ago reprinted in their original rarities. If you were too young to collect these cards when they first came out, now you have a second chance to get a Super Rare Reinforcement of the Army, an Ultra Rare Morphing Jar or Royal Decree, or even a Secret Rare Dark Magician Girl. The biggest Yu-Gi-Oh! TCG booster set EVER over 300 cards. Intimidated by the set size, but looking to foil out your Deck? Fear not! These packs are designed so that popular tournament-level cards will be easier to pull. All cards printed with updated text thats easier to understand.

Collapsible Hard-Surface Game Board - Its not just a Game Mat, its a hard-surface Game Board! This fold-up, double-sided Game Board gives you a durable and portable way to Duel and Duel in style! First of its kind to release anywhere in the world, the Game Board folds up to easily fit in your backpack or binder, and folds out to give you a durable, flat, steady surface to Duel on. One side features Yugi King of Games, the other is emblazoned with the image of the Orichalcos.
yugiiohlegendarycollection3
083717891895
121817
In Stock
New