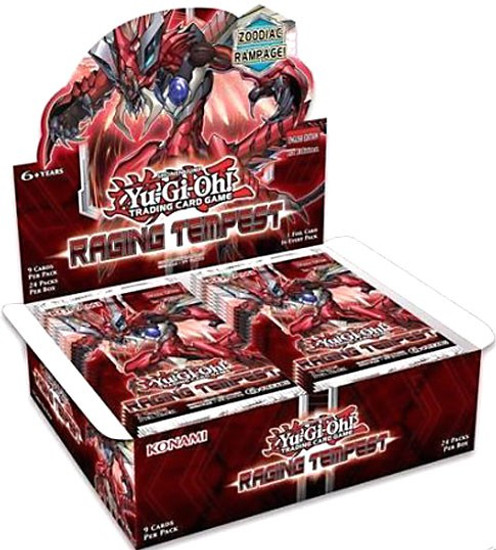 In addition to great new cards for a variety of themes, Raging Tempest also has many powerful standalone cards that can be used in many different Decks. From a new card in the extremely potent Virus series that began with Kaibas Crush Card Virus to a gargantuan monster that can reset reality, Raging Tempest is sure to heat things up on February 10th. Heres a little more of what to look forward to!

A brand-new team of Beast-Warriors that redefine Xyz Summoning! Any of the 4 Xyz Monsters in this theme can be Summoned using any 1 other monster from the theme even if its not an Xyz Monster! Each of the non-Xyz Beast-Warriors from this theme adds its ATK, DEF, and a special effect to the Xyz Monsters and there are lots of ways to add more Xyz Materials. This is a great theme for creative Duelists who like to invent new strategies for Summoning the biggest, toughest monsters possible!
Royal Spirits who conjure gale force winds to blast your opponents cards back to the hand or Deck! These powerful Spirits are Ritual Monsters that work well with cards from Dragons of Legend Unleashed and Shining Victories.
The Crystrons from Invasion: Vengeance return for another round of timeline-altering mayhem and this time theyre rewriting the rules of Synchro Summoning! Normally you use 1 Tuner and 1 or more non-Tuners, but the newest Crystron Synchro Monster uses more than 1 Tuner and exactly 1 non-Tuner instead!
The Subterror Behemoths continue their attack on The Hidden City! The hypnotic cries of these horrors allow them to temporarily control the denizens of the City and suppress interference from card effects, forcing Subterror Nemesis Warrior and his comrades to fight alone against the monsters. As the Behemoth attacks become more frequent, will they be able to hold out?
New orders! SPYRAL has identified the leaders of the international syndicate theyve been investigating, and now SPYRAL Super Agent is assembling a team of fellow agents to capture them. These new cards further capitalize on SPYRALs elite espionage skills, introduce a handy new gadget, and give your agents the authority to bring in enemy monsters for questioning.
New cards for many popular past themes from Ancient Gears to Shaddolls!
yugiohragingtempestboosterbox
083717830733
138851
In Stock
New