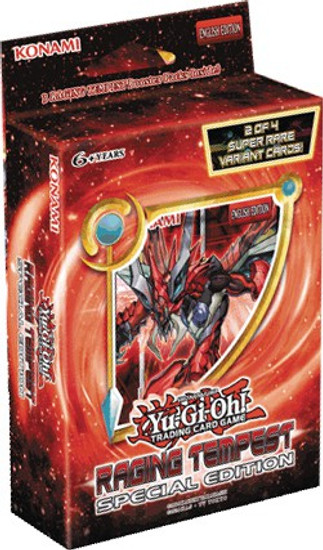 With Raging Tempest, Duelists can look forward to a set filled with great new cards for a variety of themes like SPYRAL, Ancient Gears, Subterrors, Crystrons, Shaddolls and more. Raging Tempest also has many powerful standalone cards that can be used in many different Decks, from a new card in the extremely potent Virus series that began with Kaibas Crush Card Virus to a gargantuan Crystron monster that can reset reality! In addition to this slew of support for existing themes, Raging Tempest also starts off three new themes!

- The Zoodiacs are a new team of Beast-Warriors that redefine Xyz Summoning! Any of the 4 Xyz Monsters in this theme, like Zoodiac Broadbull and Zoodiac Boarbow, can be Summoned using any 1 other monster from the theme even if its not an Xyz Monster! This is a great theme for creative Duelists who like to invent new strategies for Summoning the biggest, toughest monsters possible!

- Shinobaroness Peacock and other Shinobirds conjure gale force winds to blast your opponents cards back to the hand or Deck! These powerful Spirits are Ritual Monsters that work well with cards from Dragons of Legend Unleashed and Shining Victories.

- Blustery Spellcasters that make Synchro Summoning a breeze! Windwitches like Windwitch - Glass Bell can add a little Synchro-magic to any Deck, or you can play them as their own Deck and add a dash of Fusion Summoning to the brew.

With two guaranteed Super Rare cards in each Special Edition box, plus the 27 cards from the 3 booster packs, Duelists can power up their Decks for less than it would cost to buy 3 individual booster packs!
ragingtempestspecialedition
083717831440
143665
In Stock
New