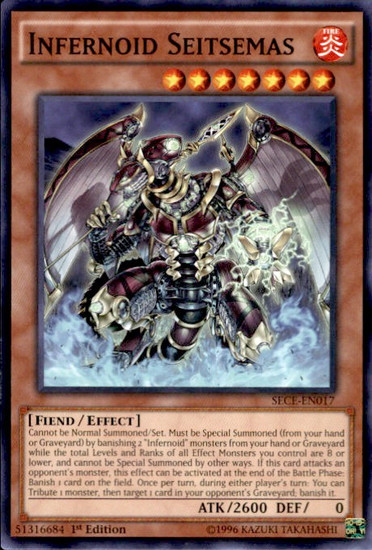 Fire. Fiend/Effect. 7. 2600/0. Cannot be Normal Summoned/Set. Must be Special Summoned (from your hand or Graveyard) by banishing 2 "Infernoid" monsters from your hand or Graveyard while the total Levels and Ranks of all Effect Monsters you control are 8 or lower, and cannot be Special Summoned by other ways. If this card attacks an opponent's monster, this effect can be activated at the end of the Battle Phase: Banish 1 card on the field. Once per turn, during either player's turn: You can Tribute 1 monster, then target 1 card in your opponent's Graveyard; banish it.
seceen017
604966695531
226206
In Stock
New