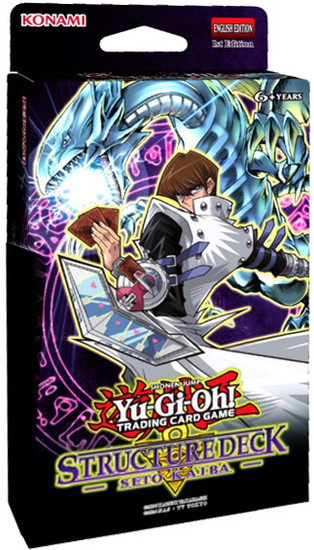 Most Duelists in the Battle City tournament could only use their monsters to attack and defend; Seto Kaiba built his Deck using monsters that could change into Equip Spells to power up and protect each other! Structure Deck Seto Kaiba revamps the original XYZ-Dragon Cannon Union strategy and introduces 3 new combining mechanized Union monsters: A-Assault Core, B-Buster Drake, and C-Crush Wyvern! These new monsters have new and improved Union abilities and extra effects that help you assemble all 3 on the field. When you do, you can combine them to form ABC-Dragon Buster, a mechanized war machine that can banish any card on the field during either players turn!

Duelists are rewarded for using the original XYZ-Dragon Cannon, also available in this Structure Deck, alongside the new ABC-Dragon Buster with the option to combine the two into A-to-Z Dragon Buster Cannon a 4000 ATK monster that can attack, and then immediately split back up into its component parts to attack two more times!