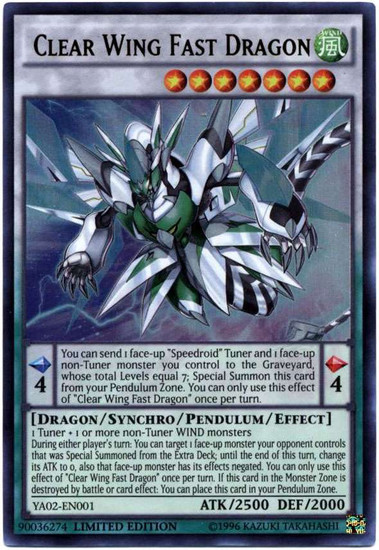 Pendulum Effect
You can send 1 face-up "Speedroid" Tuner and 1 face-up non-Tuner monster you control to the Graveyard, whose total Levels equal 7; Special Summon this card from your Pendulum Zone. You can only use this effect of "Clear Wing Fast Dragon" once per turn.

Monster Effect
1 Tuner + 1 or more non-Tuner WIND monsters
During either player's turn: You can target 1 face-up monster your opponent controls that was Special Summoned from the Extra Deck; until the end of this turn, change its ATK to 0, also that face-up monster has its effects negated. You can only use this effect of "Clear Wing Fast Dragon" once per turn. If this card in the Monster Zone is destroyed by battle or card effect: You can place this card in your Pendulum Zone.
ya02en001
604966627839
171490
In Stock
New