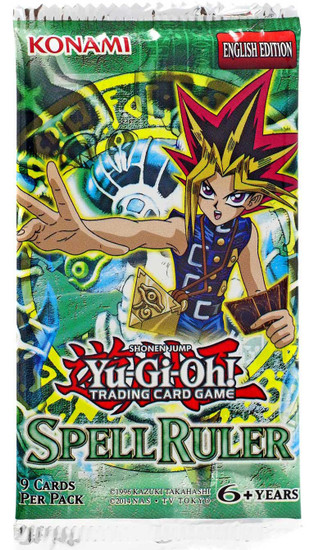 All Booster Packs sold on ToyWiz.com are pulled from fresh factory sealed product. They are completely Clean, Mint and Untampered with ... GUARANTEED!
$29.99
(You save )

Magic Ruler (MRL), later renamed Spell Ruler (SRL) to go along with the renaming of Magic Cards to Spell Cards, is the third English booster pack in the Yu-Gi-Oh! Trading Card Game. It's comprised of the Japanese sets Magic Ruler and Pharaoh's Servant. This was the first appearance of Ritual Spell Cards, Ritual Monsters, and Quick-Play Spell Cards. This Booster Pack has an overall "Magic" theme, as well as serving as the introduction of the "Toon monster" Series, which are monsters that require the Spell Card "Toon World". Highly sought after cards include "Delinquent Duo", "Snatch Steal", and "Painful Choice".
yugencargamm3
083717885115
190078
In Stock
New