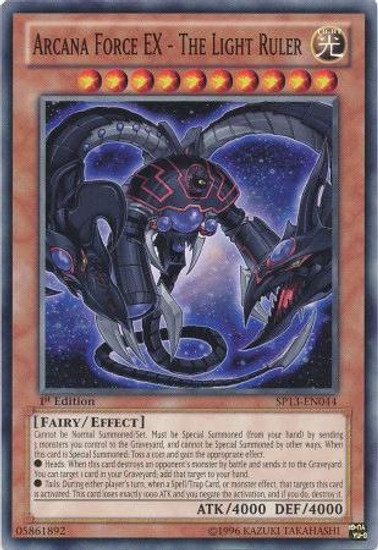 Light. Fairy/Effect. 10. 4000/4000. Cannot be Normal Summoned or Set. Must be Special Summoned (from your hand) by sending 3 monsters you control to the Graveyard, and cannot be Special Summoned by other ways. When this card is Special Summoned: Toss a coin and gain the appropriate effect. Heads: When this card destroys an opponent's monster by battle and sends it to the Graveyard: You can target 1 card in your Graveyard; add that target to your hand. Tails: During either player's turn, when a Spell Card, Trap Card, or Effect Monster's effect activates that targets this card: Negate the activation and destroy it, and this card loses 1000 ATK.
sp13en044rare
126110
In Stock
New