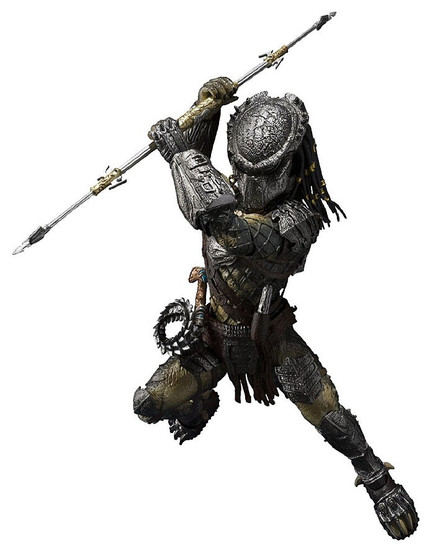 Product Size: 7"
Predator Wolf:
The second figure in the series is the "Predator Wolf" from the 2007 film "Aliens vs Predator: Requiem." It represents the "cleaner" Predator sent from their home world in order to defeat the hybrid Alien that appeared at the end of the first film, nicknamed "Predalien." To honor this fiercely proud Predator, who eschewed cooperation with humans to fight the Aliens on its own, we spared no effort to enhance the detail and poseability of the action figure. A portion of its armor is diecast metal; the weaponry is molded in finely detailed ABS; the body details are PVC; and the famed "dreadlock" hair utilizes flexible material so as not to interfere with posing. This is the ultimate action figure portrayal of the ultimate Predator warrior.
Posing technology honed in the S.H. FigureArts series lets you replicate the Predator Wolf's balance of speed and ferocity. The figure allows dynamic poses such as an unmasked howl, two-handed spear holding, and holding the slasher whip weapon to be replicated in all their on-screen glory.

The Predator's signature mask can be removed to reveal its organic face beneath. Its jaw can be swapped out with variation parts to replicate both "normal" and "howling" appearances. No attention to detail was spared, including the use of different colored eyes and the dripping outer jaw. The wrist cover opens and closes, letting you pose the Predator accessing its computer. And the right-hand wrist blade can be exposed and retracted. The retracted spear can be mounted on the back, letting you pose the Predator either in combat or with its weapon stored away.

The Predator's spear was replicated in fine detail and accurate proportions; two expanding versions are included. Expanded and retracted versions of the slash whip are included as well. In addition, the set includes "acid" effect parts (used in the film for erasing traces of its existence) a "cleaner case" with various weapons, and a "tracking cylinder" used in the film for extracting blood samples.
shmwolfpred
4543112852502
80652
Out of Stock
New