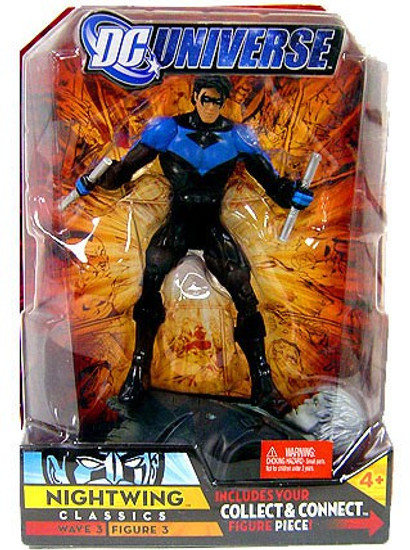 Clad in a blue and black costume, Nightwing is equipped with one of his trademark Escrima sticks. Nightwings honed reflexes are reinforced by the invaluable field experience and teachings imparted to him by Batman. Originating with the Robin character, he eventually divided from Batman and used an ancient Kryptonian superhero as his template for the Nightwing identity.
Each figure will contain a Build-A-Figure piece of Solomon Grundy. This is probably one of the best ideas for a Build-A-Figure. Solomon Grundy is a monstrous, ashy-skinned, manlike creature clad in a tattered black suit approximately seventeen sizes too small. Presented in varying stages of intellect, Grundy is consistently a savage, durable adversary frequently pitted against the likes of Green Lantern and Superman.
dcclassics3nightwing
027084596274
117462
In Stock
New