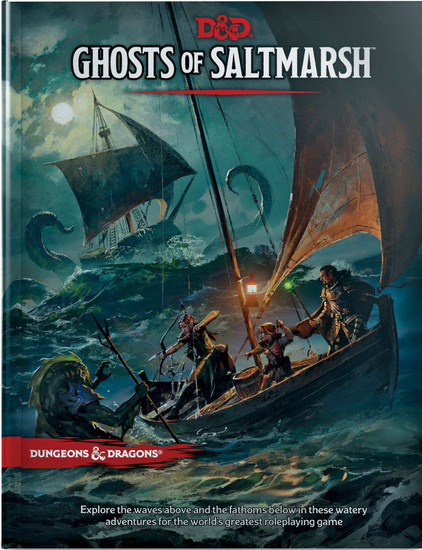 Explore the waves above and the fathoms below in these watery adventures for the worlds greatest roleplaying game.

D&D acolytes are everywhere...Tech workers from Silicon Valley to Brooklyn have long-running campaigns, and the showrunners and the novelist behind Game of Thrones have all been Dungeon Masters.Neima Jahromi, The New Yorker

Ghosts of Saltmarsh brings classic adventures into fifth edition Dungeons & Dragons. This adventure book combines some of the most popular classic adventures from the first edition of Dungeons & Dragons including the classic U series, plus some of the best nautical adventures from the history of Dungeon Magazine: Sinister Secret of Saltmarsh, Danger at Dunwater, Salvage Operation, Isle of the Abbey, The Final Enemy, Tammerauts Fate, The Styes.

Ghosts of Salt Marsh includes a variety of seafaring adventures, enough to take characters from level 1 to level 12.

This supplement introduces the port town of Saltmarsh, the perfect starting point for a nautical campaign.

Each adventure can be played individually, inserted into your ongoing game or combined into a single epic nautical campaign.

Dungeon Masters will find rules for ships and sea travel, deck plans for various vessels, an appendix with rules for new and classic monsters, and much more.