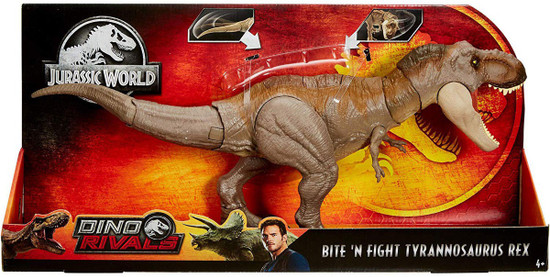 Experience Jurassic World dinosaur battle play in a whole new way! This larger-scale Bite 'n Fight Tyrannosaurus Rex has articulation and dual-button activation for fierce battle action! Push the back button on the Tyrannosaurus Rex and the tail strikes; press the front button and its head lunges forward with biting action and turns approximately 90 degrees. The harder you press the front button, the stronger the bite force becomes! You can also press both buttons at the same time for dual tail and head-striking action! This fan-favorite character has movie-inspired sculpting, an articulated head and tail, authentic color and realistic texture. Recreate all the epic Jurassic World battle-action scenes with this Bite 'n Fight Tyrannosaurus Rex-but watch out-this Tyrannosaurus Rex has a huge BITE and swinging tail STRIKE! Comes with a cool Dino Rivals collector card detailing the dinosaur's key battle stats and attributes. For more dinosaur fun, download the Jurassic World Facts app (Android and iOS) to scan and watch your dinosaur come to life, learn attack facts, compare stats and more!
bitefighttrex
887961734768
283682
In Stock
New