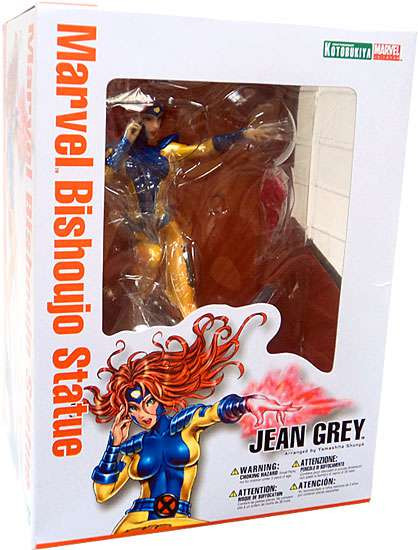 A Kotobukiya Japanese Import. The amazing Marvel Bishoujo collection (combining iconic superheroines and villians with traditional Japanese stylings) keeps on chugging with none other than the X-Men's own Jean Grey. Jean's first Bishoujo incarnation as Phoenix and Dark Phoenix in 2010 set sales records for the Bishoujo series. She returns in her iconic, Jim Lee designed costume from the record setting X-Men series of the 1990s. During that time, Jean battled villians both old (Magneto, Apocalypse) and new (Omega Red). The era culminated in her marriage to Scott Summers in X-Men #30, and their subsequent time travel to the future to raise Nathan Summers as Redd and Slym. Jean's battles and triumphs over the years has made her into a top-notch superhero, beloved the world over, and now she comes to you in the Japanese Bishoujo (pretty girl) style based on an original character reinterpretation by illustrator Shunya Yamashita. This brand-new pose and sculpt captures all the reasons why Jean Grey remains (arguably) fandom's favorite fiery redhead.
jeangreystatue
603259014127
133362
Out of Stock
New