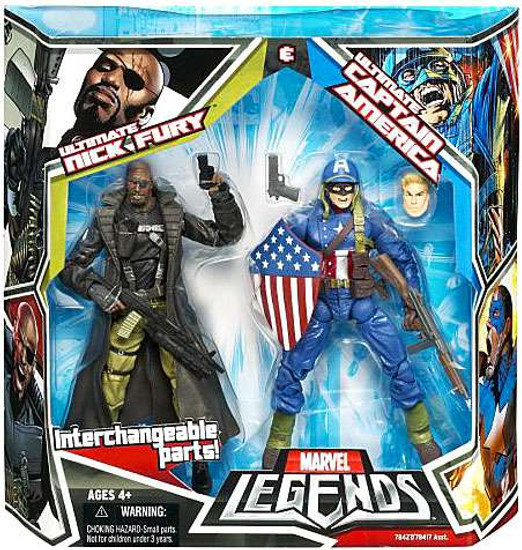 Ultimates Captain America is clad in a patriotically-themed uniform, complete with weapon belt, brown leather mask, and what appears to be a removable helmet bearing the A emblem; Captain America is equipped with a machinegun and badge-shaped shield. Ultimate Captain America was originally a weak specimen drastically augmented by the Super-Soldier Serum. This version is somewhat sterner than Captain Americas mainstream counterpart, frequently making use of firearms and explosives.

Ultimates Nick Fury is clad in a uniform and coat colored in varying shades of green; Nick Fury is equipped with a machinegun, a pistol, and a holstered pistol. In his capacity as the Director of S.H.I.E.L.D., Nick Fury was charged with the resurrection of the Super Serum program. Fury is the commander of the Ultimates. A skilled tactician and a formidable physical combatant, Fury retains access to advanced weaponry and experimental ordinance.
capamericanickfury
653569340430
117492
Out of Stock
New