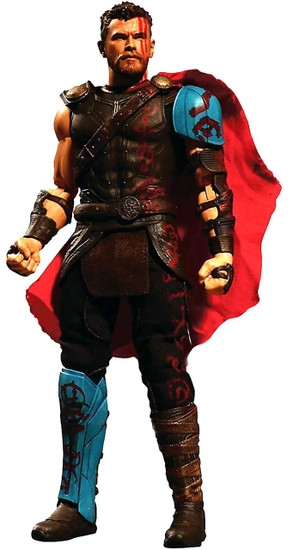 In Marvel Studios Thor: Ragnarok, Thor is imprisoned on the other side of the universe without his mighty hammer and finds himself in a race against time to get back to Asgard to stop Ragnarok the destruction of his homeworld and the end of Asgardian civilization at the hands of an all-powerful new threat, the ruthless Hela. But first he must survive a deadly gladiatorial contest that pits him against his former ally and fellow Avenger the Incredible Hulk!
The One:12 Collective Ragnarok Thor figure captures both the characters unique physique and his richly detailed costume. In addition to swords, shield, and mace, he features a helmet with film accurate rotating wings.
Because Thor is the god of thunder he comes complete with a removable lighting effect to replicate the F/X from the upcoming blockbuster.
A One:12 Collective body accurately depicting the characters physical build.
Three (3) head portraits.
Over 30 points of articulation
Hand painted authentic detailing
Over 15cm tall
Six (6) interchangeable hands including
One (1) pair of fists (L&R)
One (1) pair of posing hands style #1 (L&R)
One (1) pair of holding hands (L&R)
COSTUME:
Film accurate costume
Helmet with rotating wings as seen in Ragnarok (permanently affixed to 2nd head portrait)
Sculpted body armor
Sculpted cross body belt
Sculpted shoulder pad
Sculpted plate armor on left arm
Sculpted wrist gauntlets
Sculpted right shin armor
Sculpted boots
Fabric trousers
Fabric sleeveless undertunic
Fabric tasset
Fabric cape
ACCESSORIES:
One (1) mace
Two (2) swords
One (1) shield
One (1) lightning effect (clips to arm)
One (1) double sword sheath with sculpted swords (non-removeable)
One (1) double sword sheath without swords
One (1) One:12 Collective display base with logo
One (1) One:12 Collective adjustable display post.
mezcoone12thor
696198766103
176057
In Stock
New