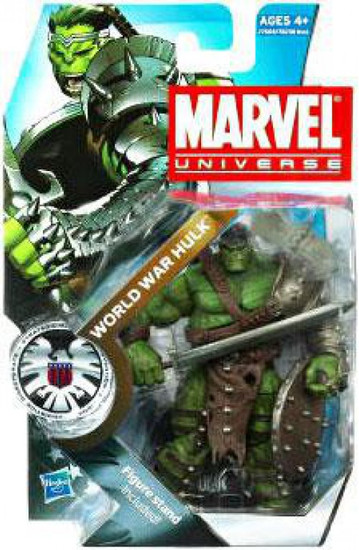 Betrayed by those he once called allies, and devastated by the destruction of a place he had come to call home, the HULK has returned to seek revenge. His massive stone starship hovers above the streets of Manhattan, and his alien army has turned midtown into a prison camp for the heroes of Earth. He will never descend to the level of those who betrayed him, but he intends to teach them all a lesson they will never forget.

Intricately detailed down to the last muscle, this articulated WORLD WAR HULK action figure is ready to fight! Send him into combat with his weapons to fight for the fate of the world or leave him posed for action on his stand as a warning against his opponents. The battle is just beginning and the power is in the palm of your hands!

Figure comes with weapons and a figure stand.

SUMMARY:
Articulated action figure comes with a stand for display after youre done enacting all of your fiercest good-versus-evil battles! Figure comes with weapons and a figure stand. Ages 4 and up.
worldwarhulk
653569564256
119037
Out of Stock
New