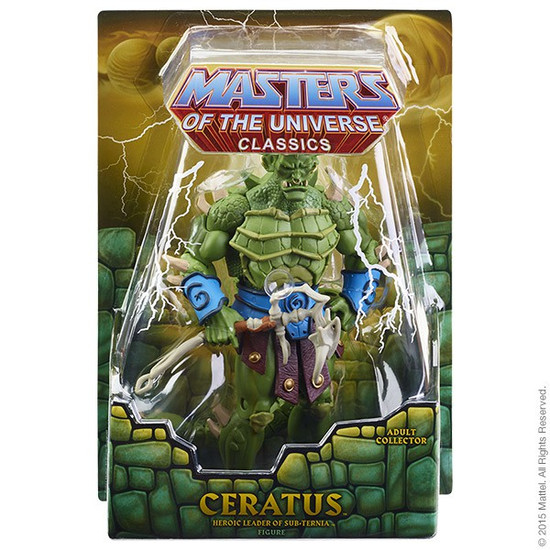 Let's hear it for the champion of Caligars! The leader of the lizard race leaps at the chance to help Sub-Ternia overcome its enemies and to avenge betrayal by his own brother, the wicked warrior Whiplash. Ceratus arrives in a leather kilt with his bone pickaxe.
Ceratus Bio
Real Name: Ceratus Krazut
Shortly after the Great Unrest ended the Caligars and Speleans returned to their kingdoms to find their homes had been destroyed while they fought with Miro on the overside. Blaming each other for the destruction, both species were plunged into a war that would continue to ravage their kingdoms for decades. It was not until the threat of Skeletor and King Hssss emerged that Ceratus, leader of the Caligars, put aside his differences with the Speleans and joined Randor's new Eternian Council. In addition to serving in this political group, Ceratus also fought as a member of the Masters of the Universe during the Second Ultimate Battle Ground. Leading a battalion of Caligar warriors, Ceratus fights for the freedom of Eternia.
ceratus
887961078077
127894
Out of Stock
New

Masters of the Universe Classics Heads of Eternia Accessory Pack