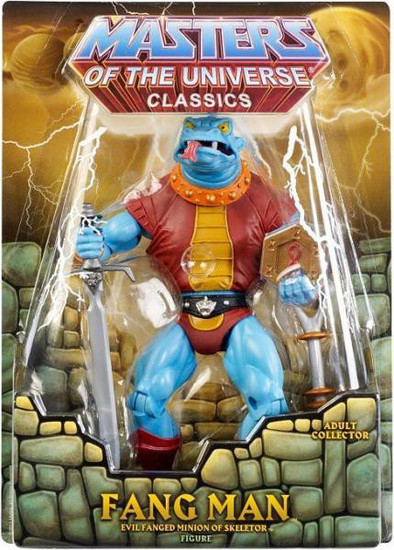 Fang Man - Evil Fanged Minion of Skeletor
Real Name: Scutes Ignis
Evolved from the ancient Dragosaur species, Fang Man spent his youth in the Valley of Dragons. Skeletor recruited Fang Man after discovering his ability to control the fire-breathing dragons to do his bidding. Fang Man used the Dragosaurs of the past to assist the Evil Lord of Destruction in his evil plans when Skeletor used the Wheel of Infinity to go back in time and stop Castle Grayskull from being built. Eventually, defeated by He-Man, Skeletor abandoned Fang Man in the past where he resides with his ancestors on Dragosaur Isle, waiting for the return of his master. Fang Man has piercing teeth and uses his mind-control ability to manipulate fire-breathing species.
hemanfangman
746775206932
250004
In Stock
New