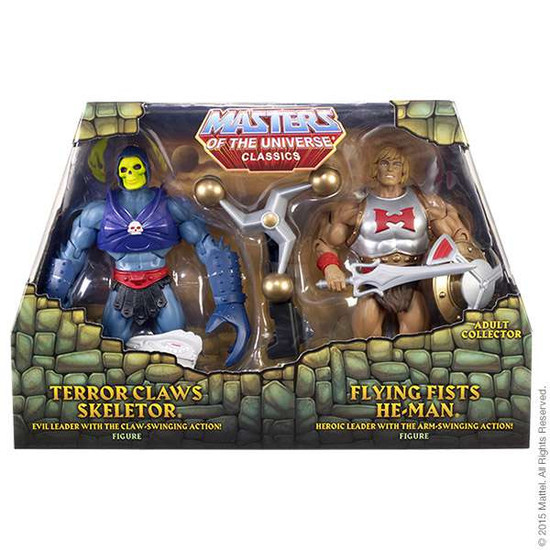 The battle for Eternia rages, and Flying Fists He-Man has a little something extra up his sleeve. More precisely, he's got a removable fist accessory at the end of his sleeve, and he uses it to send Skelly a powerful message. But Terror Claws Skeletor is not about to hand over his power he meets the challenge with two impressive oversized claws. Who will win this this epic battle?
Flying Fists He-Man Bio
Real Name: Adam of the House of Randor
After his trip to Preternia, He-Man returned to his own time period armed with the hidden knowledge of the Snakemen's one true weakness. Together with the new Sorceress and his twin sister, Adora, He-Man and the Renegade Masters of the Universe planned a final strike against all who opposed freedom. The heroes forged an uneasy alliance with Skeletor and his Evil Warriors, and clashed against the Snakemen and Horde warriors on the fields of Central Tower during the Second Ultimate Battleground. Powered by the Orb of Grayskull, Flying Fists He-Man repelled his serpentine villains with his fist-flinging power!
Terror Claws Skeletor Bio
Real Name: Keldor of the House Miro
In preparation for the Second Ultimate Battleground, Skeletor commissioned a new armor upgrade from his chief weapons master, Spikor. Arming himself with Terror Claws, Skeletor leapt into battle against the Snake Men, Horde Army and the Masters of the Universe. In single combat he slew Gygor, Lord of the Vine Jungle, and eventually fought and mortally wounded his former master. Finishing Hordak off with a magical spell which drained his essence, Skeletor learned of the might of the Horde Empire, and quickly turned his ambitions to the stars. After the battle, Skeletor left Eternia behind in favor of a grander prize as ruler of the entire Universe!
flyingfistsheman
887961070484
127893
Out of Stock
New