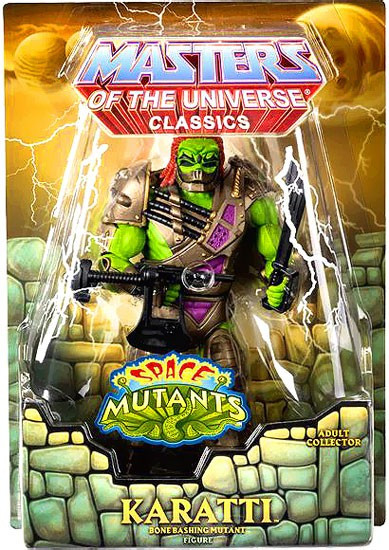 Hes kicking it Denebria style full force and minus any hint of mercy! This brutal bully doesnt hesitate to strike out at any enemy of Skeletor, and what he lacks in brainpower he more than makes up in brawn. Fully articulated, this figure arrives with power knife and side arm blaster, and features removable armor.
Karatti Bio
Real Name: Stickel-Vat
Karatti has a head as hard as the rocks of the desert region of Denebria where he lives. Unfortunately for the other evil mutants, he also possesses as much brain as one of the rocks. Although armed with a laser axe, it is the terrible bone-crushing karate blows that make him so fearsome. Fortunately for the Galactic Protectors, he is as cowardly as most of the other inhabitants of Denebria and will only attack those whom he knows to be weaker than himself. He gladly allied himself with Skeletor who offered promises of power and wealth to all who aided him in mutiny against the Horde. Karatti uses his combat moves to fight the Galactic Protectors.
hemankaratti
746775206956
122819
In Stock
New