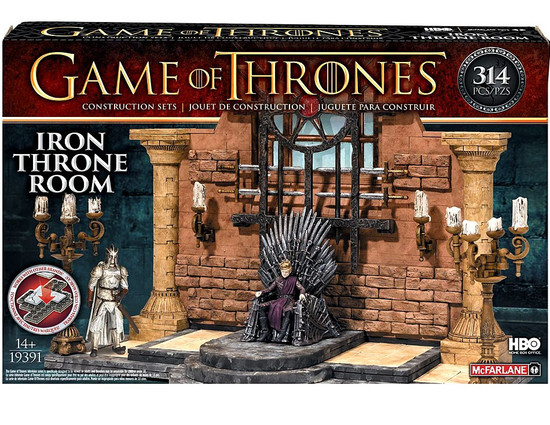 Considered the ultimate symbol of power in the land of Westeros, the Iron Throne is the seat of kings in the Seven Kingdoms. His Grace, Joffrey of House Baratheon and Lannister, Lord of the Seven Kingdoms, and Protector of the Realm sits with smug satisfaction as he torments over all of his subjects while being protected by an extremely loyal and skilled Kingsguard.Now you can build the Iron Throne Room inspired by HBO's Game of Thrones television series! This construction set from McFarlane Toys features a completely buildable scene environment with the Iron Throne, two candelabras, stone backdrop, an ornate stain glass window, sconces, buildable columns and wall. Also contains Joffrey Baratheon and a Kingsguard figure. The set, in total, is 314 pieces. Pieces are compatible with other construction brands!McFarlane Toys is bringing a revolutionary evolution in brick building toys that allows collectors and fans to literally build their favorite scenes with these highly detailed and realistic construction line. Each set brings immaculate detail, iconic environments, and convincing sculpts, all at an unpredicted size. Add multiple characters to your scenes, combine builds, or just enjoy your awesome creations on its own.
mcfarlaneironthroneroom
787926193916
109675
In Stock
New