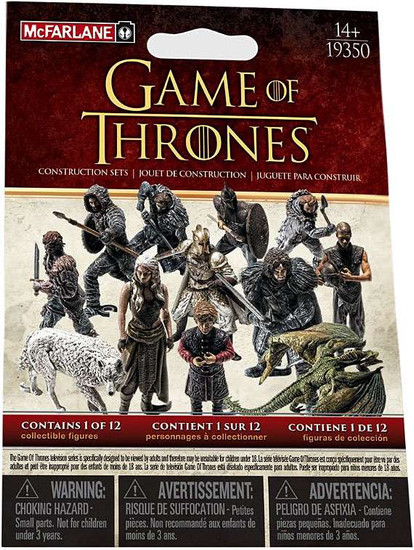 Build your favorite lead and supporting characters from the hit television series, HBO's Game of Thrones! Each blind bag includes one of twelve different McFarlane Toys construction figures to help you build your armies from different Houses and factionsthen recreate your favorite scenes from the show!
Series 1 figures includes Jon Snow, Ghost, Daenerys Targaryen, Rhaegal, Tyrion Lannister, Grey Worm, Kingsguard, Wildling with axe, Wildling with spear, Wight with sword, Unsullied (attacking), and Crow (defending). (figures vary)
Each 2 construction figure bag contains up to 5-7 interchangeable body parts and is in scale with Game of Thrones construction sets (sold separately). Figures will vary.McFarlane Toys is bringing a revolutionary evolution in brick building toys that allows collectors and fans to literally build their favorite scenes with these highly detailed and realistic construction line. Each set brings immaculate detail, iconic environments, and convincing sculpts, all at an unpredicted size. Add multiple characters to your scenes, combine builds, or just enjoy your awesome creations on its own.
mcfarlanethronesmystery
787926193503
127836
In Stock
New