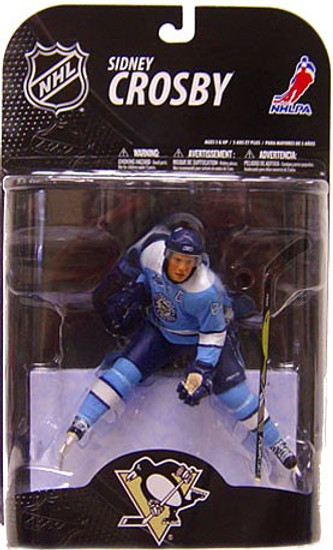 71,127 hockey fans braved the cold and a few snow flurries at the 2008 NHL Winter Classic - the first NHL game ever played outdoors in the United States. Buffalo and Pittsburgh remained deadlocked at one as overtime expired - setting the stage for a heart-stopping shootout in front of a massive international television audience. With the game on the line, Pittsburgh's Sidney Crosby squeezed a shot past Buffalo's Ryan Miller, earning a 2-1 shootout victory in one of the most memorable games in recent NHL history.
* Height: 5-11
* Weight: 200
* Shoots: Left
* Born: Aug 7, 1987 - Cole Harbour, Nova Scotia
* Draft: 2005 - 1st round (1st overall) by the Pittsburgh Penguins
nhl21crosby
787926760514
195873
In Stock
New