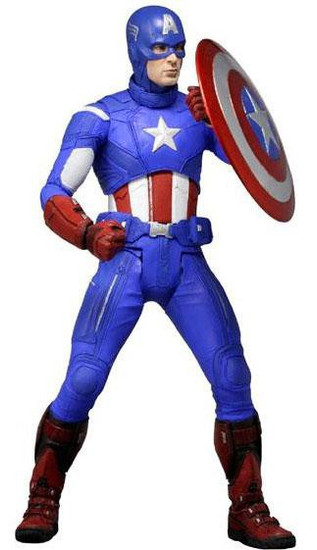 Due to the fragile nature of NECA Collectibles we cannot accept returns on opened product. We inspect each figure before sending it out, but figures can be damaged in transit. Please make sure to inspect your figure for damages BEFORE opening it.
$149.99
(You save )

The figure stands 18" tall and features loads of detail and articulation.
Over 25 points of articulation including neck, shoulders, torso, elbows, hips, knees, wrists, and more. Includes Cap's signature shield with straps and interchangeable hands.
Dressed in a modified uniform, Captain America is equipped with a shield with pop-out rocket thrusters. After Loki commandeers the Tesseract, using his Tesseract-powered staff to ensorcells Hawkeye, Dr. Erik Selvig, and a handful of additional S.H.I.E.L.D. operatives, Nick Fury reactivates the melancholy Captain America. Coordinating with the hero-stricken Agent Coulson, Captain America is provided with an updated uniform and is deployed against Loki. Initially assuming Lokis staff to be the sole extent of his power, Captain America is caught off-guard by the Asgardians resilience, however he successfully holds Loki at bay until the arrival of Iron Man and Black Widow. Loki surrenders, turning over his staff to S.H.I.E.L.D. operatives.
necacaptainamerica
634482612354
122228
In Stock
New