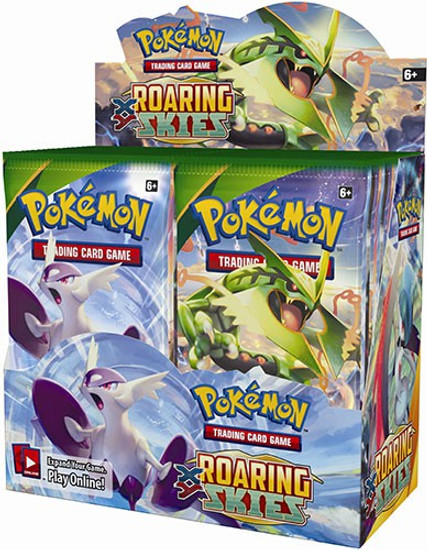 Item not eligible for total purchase discount codes.
$519.99
(You save )

Pokemon TCG: XY Roaring Skies (Japanese: Emerald Break) is the 6th expansion of cards from the International XY Series and the Japanese XY Era of the Pokemon Trading Card Game. The set features Mega Evolution, Mega Rayquaza, Mega Latios, and the Dragon-type.
Ride the winds of battle!
Diving from the edge of space, Mega Rayquaza-EX makes its magnificent debut while Mega Latios-EX and a horde of Dragon types bellow their challenge! With high-flying superstars like Deoxys, Dragonite, Zekrom, Hydreigon-EX, and Thundurus-EX, the Pokémon TCG: XYRoaring Skies expansion calls you to battle higher, faster, strongerand with all-new boosts like Mega Turbo and Double Dragon Energy cards, the skys the limit! Ascend to the clouds and soar to victory!
pokemonroaringskiesbox
820650119750
126620
Out of Stock
New