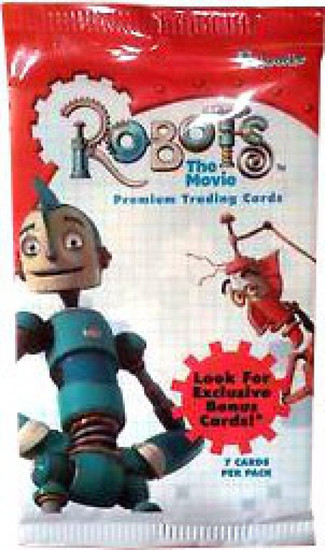 From the Academy Award winning creators of the global blockbuster hit ICE AGE comes the visually spectacular world of ROBOTS. Inkworks brings the clanky, loveable characters and story from the film to an amazing collection of trading cards. In the
film, you'll meet memorable robot Rodney Copperbottom, a young genius inventor who dreams of making the world a better place; Cappy,
a savvy executive robot at Bigweld Industries; the evil corporate tyrant Ratchet who locks horns with Rodney; Bigweld, the majestic inventor who inspires Rodney and all bots to Shine No Matter What You're Made Of; and a group of ragtag bots known as the Rusties. Experience ROBOTS' magical characters and their incredible world. The 90-card set features Movie Story Cards, Character Cards, Growing Up Cards, Robot
Powered Cards, Stand-ups and Behind The Scenes Cards. Plus, Inkworks has added randomly inserted bonus cards IN THE HOBBY-EXCLUSIVE BOXES to make it even more
collectible:
SKETCH CARDS - ONE PER HOBBY BOX! Individually, sequentially numbered cards
from 12 different fan-favorite artists. (12 different artist cards - Inserted
appx. 1:36 packs):
RUSTIES TO THE RESCUE CARDS - 9 crazy foil cards featuring your favorite Rusties. (9
cards - Inserted appx. 1:11 packs).
FENDER BENDER CARDS - 6 foil and embossed cards featuring hilarious quotes from the film. (6 cards - Inserted appx. 1:17 packs).
POSTCARDS FROM ROBOT CITY - 6 Movie Film Cards - tour the city with your
favorite characters on incredible film cards! (6 cards - Inserted appx. 1:17 packs).
PLUS, 3 box loader cards (1 per box)!
rmovpack
088472128927
143565
Out of Stock
New