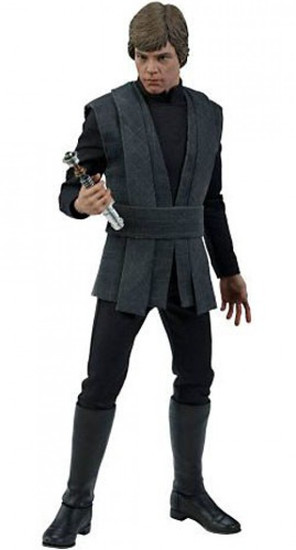 Featuring a detailed portrait of the characters appearance in Star Wars Episode VI, for his Jabbas Palace look, Luke Skywalker wears a hooded brown cloak over his iconic black Jedi outfit of a long sleeve shirt and pants, along with a gray tunic and sash. Remove the gray tunic and attach Lukes black leather-like belt with a pouch and saber hook to recreate his Jedi Knight look from his final showdown with Darth Vader. In the Endor configuration, Luke Skywalker wears his belt and camouflage poncho along with articulated black boots. The figure includes a portrait with the detailed likeness of Luke Skywalker wearing a non-removable Commando Helmet.

Witness the Return of the Jedi- to your collection! Add the Luke Skywalker Deluxe Sixth Scale Figure to your galaxy of Star Wars collectibles today.