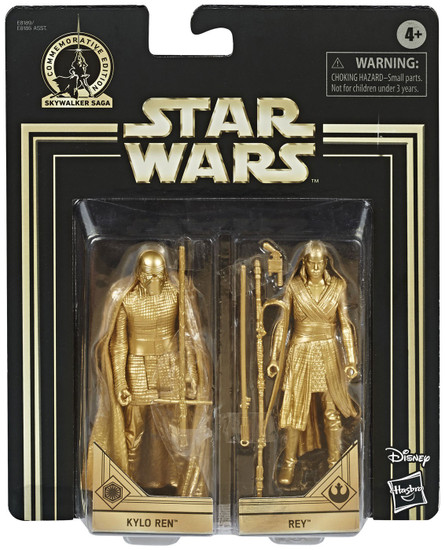 The son of Han Solo and Leia Organa, Ben Solo was seduced by the dark side of the Force and renamed himself, becoming the First Orders champion.
A scavenger toughened by life in Jakkus harsh deserts, Rey has been drawn into a galaxy-spanning conflict and learned that her life is being shaped by the mysterious power of the Force.
Kids and collectors alike can imagine the biggest battles and missions in the Star Wars Skywalker saga with figures from Star Wars Skywalker Saga collection! Commemorating the Star Wars Skywalker Saga, this series of figures includes iconic characters from the original and prequel trilogies in action figure 2-packs. Each figure has been treated with a gold finish to stand out in any Star Wars fans collection! (Each sold separately. Subject to availability.)
The 3.75-inch scale Kylo Ren and Rey toys are designed to look like the characters from Star Wars: The Last Jedi and feature multiple points of articulation.
swsskyloreygold
630509870073
316843
In Stock
New