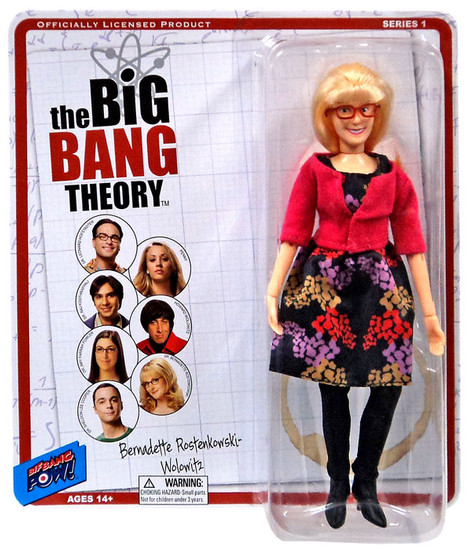 The micro-girl with a Ph.D. in microbiology is certainly cute in the TV series, and the same is true here. Standing about 8-inches tall in her familiar bright colors and glasses, and a retro style that harkens back to the bestselling Mego action figures of the 1970s and 1980s, this plastic Big Bang Theory Bernadette Rostenkowski 8-Inch Action Figure features multiple points of articulation. It will put you right there on the set with Sheldon, Leonard, Penny, and the whole gang. And if you're a fan of The Big Bang Theory, Mego, or retro figures in general, you're going to want them all! After all, it's the intelligent thing to do. Other figures sold separately.
Dr. Bernadette Maryann Rostenkowski-Wolowitz (Melissa Rauch) - is a pint-sized scientist who, aptly, has a Ph.D. in Microbiology. Her height is a source of sensitivity for her, due to a childhood bully who once replaced her clothes with an elf's costume. That was still too large. Bernadette is also not a huge fan of children. This stems from her forced employment at the illegal daycare center that her mother ran out of their homes basement. Additionally, Bernadette's father was a police officer. This is something that she admits caused her anxiety as a child as she worried about his safety constantly. She and Howard met on a blind date through Penny and instantly bonded through their mommy issues. Superpowers: Safely handling the world's most deadly viruses, Mrs. Wolowitz impressions (it's uncanny!) Weaknesses: Doesn't know how to ride a bike (because her mother thought she would lose her virginity going over a bump!), Mrs. Wolowitz impressions (it freaks Howard out!)
retrobernadette
814826016035
124209
Out of Stock
New